Cogent TYPE-C™ HPLC columns have a Silica Hydride stationary phase that is slightly hydrophobic compared to the hydrophilic stationary phases of all other industry, silica based columns. Manufactured on this unique, Hydride stationary phase, they are the only columns that can perform Aqueous Normal Phase separations and are a best choice for analyses requiring different selectivity, method precision and ease of use. They are often used in metabolomics to separate unknown-unknowns that may be both polar and non-polar in nature. Another principal feature of TYPE-C™ columns are their ability to analyze in Aqueous Normal Phase (ANP), Reversed Phase (RP) and Normal Phase (NP) modes of chromatography on the same column.
Every column is individually tested for reliability and is supplied with a test certificate. Choose from analytical, prep and guard column formats. Our onsite laboratory is well equipped and our technical team is eager to help you develop new methods, troubleshoot and answer any questions you may have. Background and technical information with links to our information rich Knowledge Base (KB) are listed below. 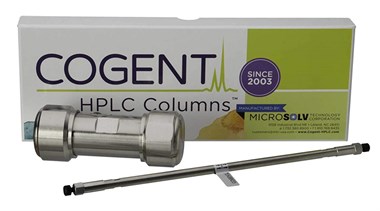 A Brief History of HPLC Silica and How TYPE-C™ Silica Hydride is Beneficial to your Lab. 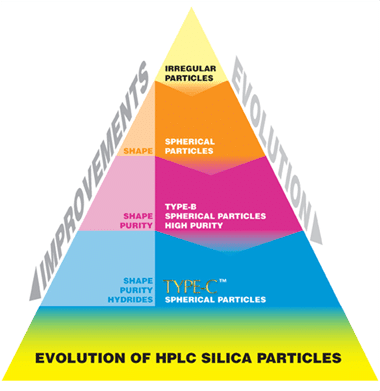 The original supports used to manufacture HPLC columns were irregularly shaped, wide pore, size distribution, silica particles. In the infancy of HPLC this was considered to be the finest technology available but, due to inherent deficiencies and inconsistencies with these silica columns, chemists doing Normal Phase chromatography were limited to using organic solvents.

To achieve "Reversed Phase" separations with water soluble samples, the silica was eventually modified with low polarity, organo-silanes, using siloxane bonding technology that created stationary phases commonly used today, such as C18 and C8.The siloxane (Si-O-Si) bonds produced in this process suffer from being hydrolytically susceptible to attachment failure during the column’s lifetime; resulting in separation problems when working at low pH or with strong buffers and ion pair reagents.

The development of spherical, shaped silica, of 10µm and later 5µm particle sizes proved to be a great advancement in HPLC supports. This uniformity of shape and size allowed for improved column packing which resulted in an increase in Data Precision and Ruggedness of the columns. Also, these tightly controlled, spherical particles did not create “fines”, as irregular shaped particles do, resulting in columns that lasted longer and were more stable. Even with this improvement, HPLC columns still suffered from tailing problems for basic compound separations at a desired pH. Today, reversed phase separations are still predominantly being performed on silica bonded with hydrocarbons.

All silica based, HPLC stationary phases have polar, acidic, silanol (Si-OH), functional groups on the surface. Even with end-capping and extensive bonding as much as 30%-50% of the silanols remain un-bonded and can contribute to unwanted separation results due to electrostatic interaction with solutes. These surface silanols also have a large participation in the partitioning mechanism. To minimize tailing and column reactivity of the silanols in Type-B silica it became desirous to use small end capping groups such as C1 to "cover" or tie up these sites. The disadvantage of this concept is that these small “groups” are readily hydrolyzed away in reverse phase solvents below pH 3; making this column technology suited to a higher pH range of 6 to 9. Many silanols sites are not fully ionized in the mid pH range causing a lack of method precision. Full ionization of these sites does occur but, at a higher pH.  Over pH 8, dissolution of the silica begins to occur with end capping fairly effective at helping to retard this process. Most loss of retention at high pH is not due to loss of the bonded phase and hydrolysis of the end capping groups (such as occurs at low pH) but, is due to dissolution of the underlying silica bed that results in the production of newly formed silanol sites causing a change of carbon load and instability of the packed column.
After irregular particles were replaced with spherical silica particles, it became further necessary to develop low metal, ultra-high purity particles which became known as Type-B silica and ordinary spherical silica was retrospectively named Type-A.

Most development after Type-B Silica was in different bonded phases, end capping and particle sizes with the mechanisms of separation remaining the same. Partitioning and Adsorption are the primary separation modalities of this silica and others such as, hydrogen bonding which remain the same from phase to phase. Until TYPE-C™ Silica / Silica-Hydride.

Cogent TYPE-C™ Silica, based HPLC columns, opened a new chapter in the book of chromatographic supports and phases for polar compounds in 2001. Based on the high purity, low metal content of Type-B silica, the manufacturing process for TYPE-C Silica™ continues where others leave off. Our process produces the next generation of silica, a surface populated with very stable, silicon-hydride groups (Si-H). This important change in the surface of the silica particle now makes it slightly hydrophobic where all other silica, Type A and Type B (Si-OH), are extremely hydrophilic. This difference in the silica surface allows, when in the presence of at least 5% water in the mobile phase, polar compounds to be retained on the charged, non-polar surface by adsorption of H+ from the auto-dissociation of water. A proposed explanation is similar to how hydrophobic oil droplets in water adsorb H+ and become soluble in the ocean.

The TYPE-C™ Silica support retains all the physical advantages of Type-B silica such as spherical shape, low metal content, high purity, high mechanical strength, narrow pore size distribution, wide range of pore sizes, easily chemically modified, no swelling in the presence of solvents for stable packed beds and does not produce fines as does irregular silica.

One of the major differences and advantages of TYPE-C™ over Type-B columns, is that a single TYPE-C™ column can be used for 3 different modes of HPLC. This produces a new selectivity power that no other column has. On a single column you can separate polar and non polar compounds at the same time or in different runs with different mobile phases.

One column can be used for classic reversed phase, normal phase (with non polar solvents such as, hexane) and also for, normal phase elution with aqueous solvents, called Aqueous Normal Phase (ANP). ANP has many advantages over HILIC including but, NOT limited to:  precision,  fast equilibration including gradients, uses much lower salt to retain polar compounds, smaller sample sizes and flexibility with bonded phases such as C18.

Other benefits are the very fast equilibration speed between gradients and the ability to clean your column from matrix effects between runs. Typically, the TYPE-C™ equilibration/cleaning runs are less than one minute or 3-5 column volumes. These columns are especially beneficial for polar and water labile compounds, including metabolites and peptides.

The images above depicts the structure differences between ordinary silica and TYPE-C Silica. The Silica-Hydride surface is exclusive to TYPE-C™ and is responsible for all the uniqueness of Cogent TYPE-C Silica.

TYPE-C™ Silica has a weak association with water due to the hydrophobic nature of the Silica-Hydride particle. Even with H+ ions  adsorbed to the surface TYPE-C™ Silica will not adsorb or develop a water layer which occurs with Type-B silica. The water shell on Type-B silica is semi-permanent and becomes an integral part of everyday HPLC mechanisms as partitioning cannot exist without it. Since TYPE-C™ Silica does not adsorb water, there is no partitioning mechanism at play and the retention is simplified. The dominant mechanisms of the Silica-Hydride particle are mostly adsorption and ion interaction (Hydrogen Bonding).

The surface of Cogent TYPE-C™ Silica is predominantly populated with non-polar, silicon-hydride (Si-H) groups instead of the polar, silanol groups (Si-OH) that are prevalent on the surface of ordinary varieties of silica. This feature gives the Cogent TYPE-C™ columns many unique, useful and helpful chromatographic qualities, especially for polar & water labile compounds, including metabolites and peptides.

The Cogent TYPE-C™ columns overcome some of the inherent limitations of ordinary silicas associated with free silanols:

No Adsorbed Water on TYPE-C™ columns

Less than 1/2 monolayer of water forms.

Strong adsorption of water to Type-B silica is well known and well documented.  However, the silicon-hydride groups (Si-H) found on the surface of Cogent TYPE-C Silica™ Phases are not prone to such strong water retention (shown above) making it an excellent choice for polar and non-polar compounds. The weaker water adsorption also accounts for the little to no hysteresis observed when changing from Organic-Normal to Aqueous-Normal to Reversed Phase and also, when changing your sample pH and mobile phase.

TYPE-C™ Silica columns also, extend the useful range of Normal Phase from Hexane/Ethyl Acetate all the way to Water/Acetonitrile with excellent precision.

Not having a strong association with water makes the TYPE-C™ columns preferred over HILIC phases which often exhibit long term memory and equilibration effects.

Bonded Phases for Closely Related Compounds; All Have a Unique Attachment to the Silica. 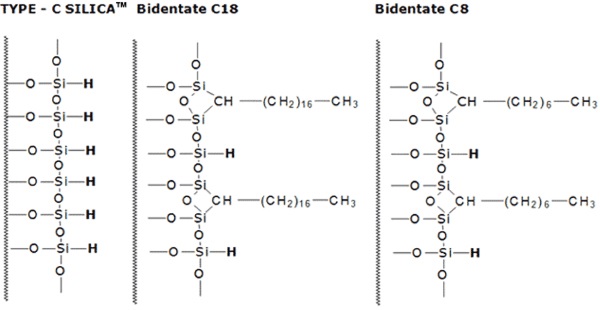 Examples of the unique bonds formed on Cogent TYPE-C™ Silica, the only direct Silicon to Carbon bonds which are extremely stable.

Because of the unique Silica Hydride surface, Cogent TYPE-C™ silica are bonded with ligands to create distinctive stationary phases with unique points of attachment. These strong, direct, silicon, ligand bonds (without the ordinary, intermediary, functional group) create bonded phases that are stable and resistant to conditions that can cause hydrolysis; producing columns with much longer and useful lifetimes.

The variety of TYPE-C™ stationary phases offer changes in selectivity, working in addition to the basic adsorption mechanism of the silica hydride for excellent separation of closely related compounds. The overall mechanism of the bonded stationary phase is largely dominated by the TYPE-C™ Silica particle with the bonded phase often acting as a secondary selectivity and retention mechanism which can be extremely important.


Click HERE for a listing of all Cogent TYPE-C™ Stationary Phases.

Another unique feature of the Cogent TYPE-C Silica™ based columns is the Silica Hydride surface can act independently of the bonded phase giving it the ability to interact differently with non-polar to mid-polar compounds.

An example of this mechanism is work done by MicroSolv™ on Metformin and Glyburide, two anti-diabetic drugs of vastly different partition coefficients. When separating these two compounds from a single mixture, the Silica-C™ Column (unmodified Silica-Hydride) produced good separation of the compounds with good peak shape for Glyburide and a slightly tailing peak shape for Metformin.

When the Cogent UDC-Cholesterol™ Column is used instead of the Silica-C™ column, the peak shape is excellent for both compounds. This suggests the bonded phase interacts differently from the silica surface and that the silica surface is acting on the compounds similarly in both Columns. Contact Customer Service if you would like more information.